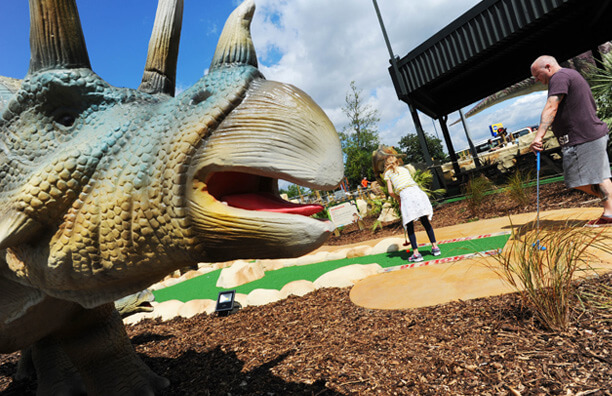 Here at Jurassic Falls we wish for every visitor to experience a Jurassic phenomenon like they have never seen before! We wish to provide a place where you can escape the monotony of everyday life and experience a wacky and wondrous adventure. Our spectacular Jurassic themed golf course would not be complete without our team of dinosaurs… At Jurassic Falls we have 8 lifelike animatronic dinosaurs for you to feast your eyes on! Before you come down to meet them in person we’d like to give you a little introduction. So, without further ado meet our dinosaurs…

Spike the Spinosaurus is the largest of all known carnivorous dinosaurs on earth! There are plenty of reasons why Spinosaurus’s are dinotastic…

Allison the Allosaurus is a large carnivorous predator that scientists believe preyed on the many herbivores of the time. They figured this out from the observation of the great number of razor sharp teeth that can be found in this predator’s mouth (How frightening!)

Trident, Tilly and Tazer are our sweet family of Triceratops that live here at Jurassic Falls – they are herbivores that lived during the late Cretaceous period which was a whopping 68 million years ago. ‘Triceratops’ translates into “3 horned face” from the Greek “Tri” meaning three and the word “keratops” meaning face…(Literally meaning three face LOL) Some people think that this dinosaur’s horns were used to protect itself in combat against other dinosaurs— especially the T- Rex—which is known to have been the Triceratops enemy!

Terror the Tyrannosaurus is believed to be one of the most fearsome dinosaurs ever! It was roughly 40 feet long from head to tail and weighed approximately 7 tons. It is believed this dinosaur feasted on large herbivore dinosaurs such as triceratops and brontosaurus dinosaurs. (Poor dinos) Tyrannosaurus had a very deadly bite. It had a minimum bite force of at least 12,000 pounds and could eat over 500 pounds of meat in one bite. (Imagine all those teeth!)

Stella the Stegosaurus is a dinosaur that lived around 155 million years ago during the Jurassic Period. Stegosaurus’s are herbivores known for its rounded back and its double row of back plates that end with a double pair of spikes on this dinosaur’s tail. An fun fact about the stegosaurus is that out of all of the dinosaurs, Stegosaurus had one of the smallest brains. Although the actual anatomy of this dinosaur’s brain is currently unknown, it is known that it only weighed approximately 3 ounces!

Theodore the Pterodactyl lived approximately 150 million to 145 million years ago during the Late Jurassic Period. Pterodactyls was approximately 3 feet long with a wingspan of about 3 feet. An interesting fact about Pterodactyl is that it is often depicted as a large winged beast which was able to seize big animals with its claws and carry them back to their nests. However, these creatures were way too small to do things like that in reality

Now you have had an opportunity to get to know our dinosaurs it’s time for you to come and meet them for yourselves, make sure to head down to Jurassic Falls for some prehistoric fun!