Dinosaur Escape – Who is Dr Dino? 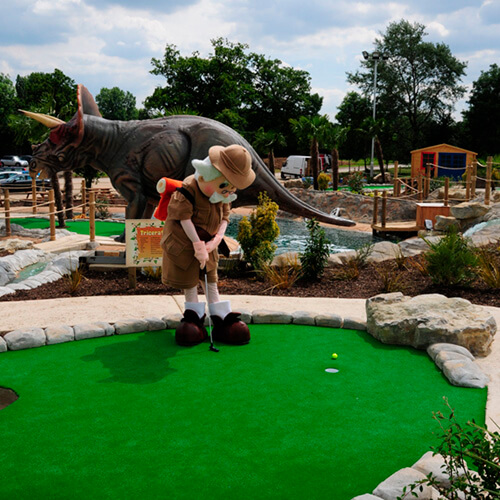 Well, Dr Dino is just that. The doctor who takes care of all our ferocious friends!

You can recognise Dr Dino by his tall white hair and his lab coat – he never takes that thing off… But one thing’s for sure, if you don’t spot him out on the adventure golf course, you’ll find him in his TOP SECRET lab watching over the incubators as our dino friends watching them hatch from their eggs.

Dr Dino is just great! He looks after so many different dinosaurs ranging from a TRex, Triceratops, Diplodocus, Apatosaurus and more!

Just yesterday our Pterodactyls began to hatch. You used to be able to find them just behind our dino hut but they’ve left the nest now where they soar in the skies above.

You see Dr Dino is what we call a Palaeontologist! What’s that you say?

Yes it’s a bit of a mouthful. But if you pronounce it phonetically its easy really: Pale – e – on – tol- o – gist

Well a palaeontologist is a scientist who researches and learns about fossils and the life that existed millions of years ago. If you break it down it literally means the study of ancient beings, ‘paleo’ means ancient, ‘onto-‘ means being and ‘-ology’ means study.

So, what are fossils?

The word fossil come from the Latin language and it translates as ‘obtained by digging’. This is because fossils are most commonly found in something called sedimentary rock which can be buried very deep underground. There are many different kinds of fossils including bones, teeth, claws, shells, imprints etc. which are categorised into 4 groups:

Although, to be considered a fossil the item must usually be over 10,000 years old. Some of the oldest fossils are over 4 billion years old. Now that’s pretty old!

But what do palaeontologist do with fossils?

They try to work out what the fossils are, so whether they are an animal, a footprint, an exoskeleton etc., what kind of animal they came from and how old they are. This can be very difficult as usually fossils are small fragments e.g. you may only find a handful of bones from a dinosaur leg or half of a shell.

What do they do with this information?

Fossils that have been collected and studied are known as the fossil record. Palaeontologists use the fossil record to study evolution and the history of life on earth. This is how we know about life that existed millions of years ago. Fossils can tell us a lot of information about ancient life including how big animals were, whether they ate meat or were vegetarians, how fast they moved, whether they moved on legs and how many ( 2 legs vs 4 legs), what their skin was like (you can tell this from imprints) and much more.

In Dr Dino’s case he studies dinosaurs. I guess that’s what makes him so good at looking after our resident friends.

Make sure to check out our information boards situated around the course. There are plenty of fun facts for you to learn! You can learn about how many teeth a T-rex has or how big some of our dinosaurs are!

But that’s not all. Dr Dino takes care of all our dinosaurs, making sure they are all well fed so they don’t eat you! He is our resident dino expert! If you spot him out and about this summer be sure to say hi and ask him a question about our dino’s. He’s sure to have the answer. But be careful of his little friend. We can’t promise that he won’t bite!